jenobi, former known as Felicia Försvann, is the soloproject of the swedish singer-/song writer and bass player Jenny Apelmo Mattsson.

When the Torpus & the Art Directors singer wrote the song “4x7”, his then-25-year-old bass player never fully understood the meaning of his words. Three years later, Jenny Apelmo Mattsson has finally realised what turning 28 is all about. The saccharine sweetness of her solo project, Felicia Försvann, has taken a different turn. “I’ve done sweet. More by accident than design. Now I’m dead serious”, is the Swedish singer/songwriter’s new line of attack. But this change of attitude is in need of a new name. A wiser, more dangerous undercurrent has been added to the melancholic, tender songwriting.

The sound is stronger and moodier. Darker, gripping indie pop is driven by pulsating rhythms. And with that, Felicia disappears to make way for jenobi – who now takes the stage. Soaking up inspiration and widening the horizons, to a world of new sounds and stories. It’s going to be a stubborn, but exciting journey – on a rocky road towards an unknown, but brilliant future.

All are songs written by Jenny Apelmo 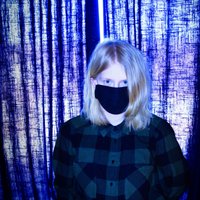 jenobi is currently working on her first album.

Releasedate will be announced in the fall of 2020.